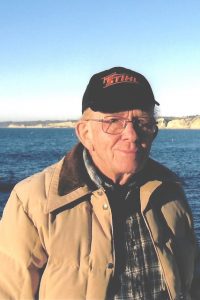 A Celebration of Life Memorial will be Saturday, May 15, 2021 from 1:00 p.m. – 3:00 p.m., with family present during this time, at Rohde Funeral Home in Kingsley, Iowa. Online condolences can be sent to rohdefh.com.

Ray was born to Louis Henry and Minnie (Wilhelmina Wiebke) Mohning on April 3, 1933 in LeMars, Iowa. He grew up on the family farm near Oyens, Iowa, attending country school. Ray graduated from LeMars High School in 1951. He spent his first years out of school farming and married Cardula Murray, daughter of Cal and Bridget (Madden) Murray, on November 25, 1953 at St. Michael’s Catholic Church in Kingsley, Iowa.

He entered the military on January 17, 1955, serving for two years with the U.S. Army in Amberg, Germany. When he returned home to LeMars, he went to work for Gamble-Skogmo, Inc. The company soon transferred him to Worthington, Minnesota; Yankton, South Dakota; and finally Mitchell, South Dakota, where he spent eight years as credit manager.

In 1970 Ray moved his family of seven into a farmhouse north of Kingsley where he returned to farming.

After two years he moved the family to town and set up shop as a general contractor, calling his business Ra-Moh Construction. He spent many years working construction until he retired (sort of).

Ray enjoyed hunting, fishing and Scootch’s. In 2019, when his health and mobility started to fade, he moved to a 55+ community in Mesa, Arizona, where he enjoyed spending time in the sun. He passed peacefully, in his home, on March 21, 2021.

Ray is survived by his daughters Judi (Mike) Dugan and Cheryl Lenz; sons Bruce (Sally), Bryan (Nita) and Brad (Vicki) Mohning; grandchildren Kevin (Krista) Dugan, Gina Dugan, Dede (Raymond) Clark; BJ, David, Desiree, Janice and Brittany Mohning, all of AZ; and Olivia Mohning of CA; along with several great-grandchildren and numerous nieces and nephews that will be missing him.

He was preceded in death by his parents; his wife; in-laws; and brothers Amie, Merlin, Louie and Hank; sisters Alverna, Esther, Norma and Helen. He was also preceded by his grandson, Calvin Mohning.