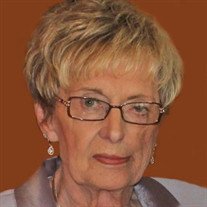 Donna Marie Meylor, 85, of Sioux City, passed away peacefully on May 6th, 2021 surrounded by her children.

A funeral service will be held at 10:30 a.m., Tuesday, May 11, at Christy-Smith Funeral Homes, Morningside Chapel. Burial will take place at St. Joseph’s Cemetery in Salix, Iowa, at a later date.

The daughter of MF and Ella Puttman, Donna was born August 23, 1935 in Pierson, Iowa. She graduated from Pierson High School in 1953. On October 29th,1955 Donna married her long-time love and friend Lawrence E. Meylor. They remained married until Larry’s passing in 2007.

Donna held many roles throughout her life, most importantly she was a loving and caring wife and mother. She served as farmhand on the family acreage including caring for chickens, pigs, horses, sheep & a cow named JoAnn.

Together Larry and Donna owned and operated a SEARS store in Harlan, Iowa before returning to their hometown area where Donna later retired from MCI.

Donna had many passions. She was an avid cross-stitcher and made several beautiful quilts for her grandchildren.

She also enjoyed following her favorite men’s basketball team, the Iowa Hawkeyes. Some of her favorite past times were visits from her children, grandchildren and great grandchildren; playing cards with her friends and neighbors; and mostly making sure there was enough food in the freezers for the entire neighborhood.