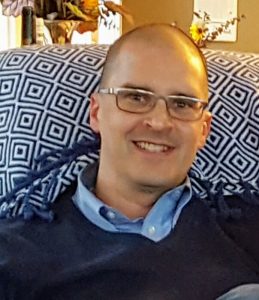 A funeral Mass for Ryan J. Mahoney, age 45, of Lawton, will be held on Saturday, June 5, 2021 at 11:00 A.M. at the Sacred Heart Catholic Church of Boone, Iowa with Father Tim Johnson officiating.

Ryan Joseph Mahoney of Lawton, Iowa, passed away peacefully at home on March 29, 2021, following a courageous battle with glioblastoma. Memorials in honor of Ryan may be given to the Lawton-Bronson Education Foundation c/o Lawton-Bronson High School 100 Tara Way Lawton, IA 51030 or the Blackhawk Lake Protective Association PO Box 821 Lake View, IA 51450. Online condolences can be made at nicklasdjensenfh.com

Ryan was born on July 12, 1975, in Topeka, Kansas, to Michael Mahoney and Margaret (Peggy) Mahoney. Ryan and his parents moved to Ogden, Iowa, in 1981 after Mike and Peggy finished law school and graduate school. He had a younger sister, Meredith, and serving as a protective big brother was one of his favorite roles in life.

Ryan graduated from Ogden High School in 1993 and attended Iowa State University, graduating in 1998 with a Bachelor of Science degree in History. He started his own lawn care business, Cyclone Lawn Care and later Emerald Lawn Care, while in high school.

He operated this business while attending and after graduating from college. Ryan later worked for Edward Jones. He then attended Washburn University School of Law and graduated with his Juris Doctorate in December 2003. During law school he met Kelly Elliott and they married on June 7, 2003, in Anthony, Kansas.

Following law school, Ryan and Kelly made their home in Boone, Iowa. He practiced at his family’s law firms, the Mahoney Law Firm, PC, and Jordan & Mahoney Law Firm, PC. He had the good fortune of working with his father, sister, wife, and close friends and colleagues Richard (Dick) Jordan, John Jordan, and John Flynn. He served as a board member for Child Care Junction in Boone and was part of the Ogden Alumni Association.

In 2017, Ryan and Kelly moved to Lawton, Iowa. Ryan served as a board member for the Siouxland Sharks swim team and was involved with the L-B Education Foundation. He was also a member of the Iowa State Bar Association and Boone County Bar Association.

Ryan and Kelly were blessed with three children —Alice, Erin, and Elliott. He was proud beyond measure of his children. Being their dad was the best part of his life. He shared his love of the water with his children.

Ryan began swimming when he was five years old. He swam on club teams with the Boone YMCA and the Ames Cyclone Aquatic Club, and for the Boone-Ogden High School team. He qualified for the state swim meet all four years in high school and set many long-standing school swim records.

After high school, he swam at Iowa State University, where he was a member of the 1995 Big 8 Championship team. Ryan also loved spending time at Black Hawk Lake, where his family had a cabin starting with his great grandparents.

Ryan loved to waterski and was proud to watch all three of his children and two nephews to ski and enjoy other water sports. Ryan made many close friends throughout life. He was a loyal friend and treasured time spent with friends and family.

Ryan was preceded in death by his grandparents: Robert and Alice Mahoney, Ruth Boyles, and Joe and Alma Johnson; and his aunt and uncle, Mary Margaret (Mahoney) Burton and Richard Burton.

He is survived by his wife, Kelly, and children, Alice, Erin, and Elliott, and the family dogs, Gantore and Oscar; his parents, Mike and Peggy Mahoney of Boone; his sister and brother-in-law, Meredith and Nate Nerem, and nephews, Carden and Hayden, of Boone; his aunts and uncles: Tim and Judy Mahoney of Omaha, Nebraska, and Pat and Shawn Mahoney of Overland Park, Kansas; cousins: Dan Mahoney, Mark (Christina) Mahoney, Paul (Abbey) Burton, and Sarah Burton; his in-laws: John and Mary Thomas and Chris Elliott, all of Anthony; his siblings-in-law and their families: Tim Elliott, Jared Thomas, Adam Thomas, Andi Giesen, Mandy Duncan, and Rocky Elliott; and many friends.

Ryan’s family would like to thank the June E. Nylen Cancer Center, Mayo Clinic, and Hospice of Siouxland Hospice and Palliative Care for their outstanding care and assistance, and the amazing outpouring of support from friends and family.