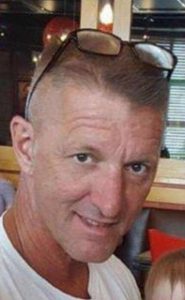 A funeral service was held on Wednesday, June 2, 2021 at 10:30 a.m. at the Grace United Methodist Church of Correctionville with Rev. Carl K. Benge and Clif Cockburn officiating. Burial will be held at the Good Hope Cemetery of Pierson with military rites conducted by the American Legion Mumford-Moon Post #79 of Correctionville.

Byron Ray Roggatz was born on March 11, 1963 to Alvin and Sandra (Boecher) Roggatz in LeMars, Iowa. Byron graduated from Anthon-Oto High School in 1981 then attended Wayne State College where he was a member of the TKE Fraternity.

He was united in marriage to Lisa (Koch) Beeck and two children, Nathan and Jennifer were born. The couple later divorced. Byron was a lifelong resident of NW Iowa, living and working in Anthon, Correctionville, Sioux City, Akron and Moville.

He was the owner of Fine Lines Paint and Body in Akron and most recently, he worked alongside his family at Roggatz Tree Service in Correctionville. His family was near and dear to him.

Byron was a member of the Little Sioux Cycle Club, NW Iowa Tractor Pullers and the Akron Fire Department.

Byron toured nationally with “New Way Singers,” from Nebraska Christain College for several years. He was also a Page for the Iowa House of Representatives Don Doyle and Al Sturgeon.

He is survived by his parents, Alvin and Sandy Roggatz of Correctionville; a son, Nathan Roggatz of Sioux City, IA; a daughter, Jennifer (Kane) Koster of Hockley, TX; his grandchildren, Peyton and Ellie Koster; special friend, Kay Kramer of Hawarden, IA; siblings, Collette (Bill) Ledger of Iowa City, IA and Brad Roggatz of Moville, IA; and five nephews that he loved dearly.

Byron was preceded in death by his grandparents, Richard and Opal Boecher and Carl and Ellen Roggatz.