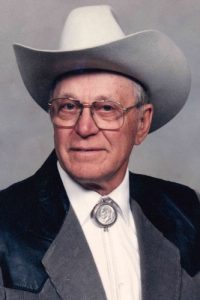 Services was held at 11 a.m. on Wednesday, June 2 at the Hornick United Methodist Church, with Pastor Catie Newman officiating. Visitation was held from 5 to 7 p.m. with prayer service at 7 p.m. on Tuesday, June 1 at the church. Arrangements are under the direction of Waterbury Funeral Service of Sergeant Bluff.

In 1943 he was stationed at the Sioux City Army Air Base where he met Elizabeth Sas.

On May 3, 1946, he married Elizabeth Sas; she passed in 2005. Sam worked at the Stock Yards as a herdsman and at Swifts Packing House. In 1949 he was injured in the explosion at Swifts. In 1951 Sam bought a farm in Hornick which he farmed.

Sam enjoyed square dancing and was a member of the Hornick UMC, and American Legion Post 492 Hindman-Steele.

Samuel is preceded in death by his parents; wife Elizabeth; a daughter, Merrillee Hallowell; a son, Samuel T. Hallowell; a brother, Arlie Hallowell; a sister, Elaine Jackson; and a half-sister, Helen Winans.