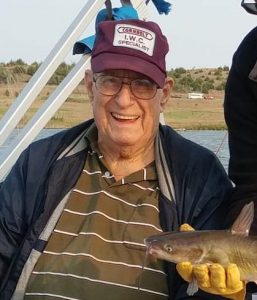 Celebration of Life Service will be held at 11:00 a.m., Saturday, June 12, 2021, at Rohde Funeral Home in Kingsley, Iowa. Visitation with family present will begin at 9:00 a.m. until service time. There will be military rites conducted at the funeral home by the U.S. Navy and American Legion Nash Post 140 of Kingsley, Iowa. The service will be livestreamed on Rohde Funeral Home website. Online condolences may be sent to rohdefh.com.

Don was united in marriage to Arlene Ahrens September 2, 1953, at the Kingsley United Methodist Church. Don and Arlene raised their family in Kingsley where Don worked for 40 years at the farmers COOP as a truck driver, retiring in 1995.

Don never knew a stranger and always had a new joke. He would coffee with the boys at Scootch’s, telling his jokes and sharing his fish stories. Don and a Navy buddy were hitchhiking to the base and was picked up by the actor Richard Widmark. They spent the day eating and swimming then he took to two back to the base. Arlene and Don started the avenue of flags after their youngest son, Neil was killed.

The family would walk beans for vacations to Canada. Cousins Patti (King) Volkel and Jody (Andrews) Kline joined them yearly. For the girls to join them in Canada, Don and Arlene had to become their guardians and were always referred to as the adopted daughters.

Don wintered in Florida for several years and enjoyed a trip to Belize with Bob and Phyl Powell. Every Thursday one could find Don, Joanne, Ethel and Carolyn dining at Brookside Golf Course and every Sunday they would try out different places to eat.

Don enjoyed many activities throughout his life such as golfing, Hamm Radio, rock hunting, fishing/ice fishing, baking, and sharing his treats, bowling at Pla-Mor and Plaza Bowl (held offices), Boy Scout leader, Mason (held many offices), Shriner, High 12, and Scottish Rite. He started Jr. Bowling League and taught kids to bowl. He was behind getting the new Masonic Hall built. Don had received the Kingsley Jaycee’s Distinguished Service Award.

Don’s last fishing trip was the fall of 2020 with grandsons Chad, Chuck, Lars, and Joe. He had the time of his life catching their limit all three days. His family was his world and his life revolved around his family. Chances are, if you were looking for your kids, you would find that at Don and Arlene’s.