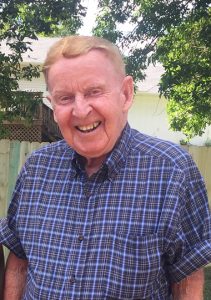 Services were held 10:30 A.M. Thursday, June 24, 2021 at Hornick United Methodist Church, in Hornick, Iowa with Pastor Catie Newman officiating. Burial followed at Willow Cemetery in Holly Springs, Iowa with Military Honors by the United States Army and the Hindman-Steele American Legion Post #492, of Hornick. Arrangements are under the direction of Rush Family Care Service, Onawa, Iowa. Condolences may be left online for the family at www.rushfamilycareservice.com

Wayne was born December 22, 1926 the son of Glen E. and Alice L. (Kurtzer) Mitchell in Roca, Nebraska. He graduated from Central High School in Sprague, Nebraska in 1945.

Wayne enlisted in the United States Army in 1946 and was honorably discharged in 1948 after serving during the occupation of Japan. He then attended the Lincoln Commerce of Business School in Lincoln, Nebraska.

Wayne and Velva Juilfs were married on September 5, 1952 in Talmadge, Nebraska. They enjoyed 60 years of marriage. Two daughters, Vickie and Judy, were born to this union. Wayne and Velva moved to their farm near Hornick, Iowa in March of 1953.

Wayne was a lifelong farmer in which he took much pride. He was a pioneer of the open ditch irrigation system, being the first Northwest Iowa to use this method. Always a hard worker, but always found time to enjoy his family and friends.

Wayne loved sharing stories of his 4-H experiences too. He also enjoyed walking, running, bicycling, and pedicures! He rode his bike on many 30-mile trips in Texas up until age 80.

He was a member of the Hornick United Methodist Church, and belonged to the American Legion Post #492 of Hornick.

He was preceded in death by his wife, Velva on June 2, 2013; his parents, Glen E. and Alice L. (Kurtzer) Mitchell; his brothers, Lyle and Harold Mitchell; and his brother-in-law, Bob Wiebusch.