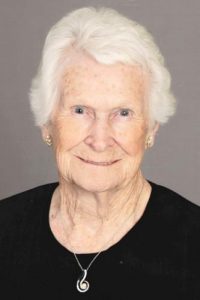 Dorothy was born on May 1, 1925 in Washta, Iowa, the daughter of Leonard and Azalia (Clark) Godfrey. She graduated from East High School in 1942. On June 6, 1944 Dorothy was united in marriage to Edward M. Amick at her parents’ home.

Dorothy and Ed shared 65 beautiful years together. Dorothy was a true matriarch of the family. Her family and her home meant everything to her. She was a talented homemaker and seamstress.

She enjoyed tending to her flowers and watching the birds and animals at her feeder. Dorothy was happiest surrounded by children. She warmly welcomed family and friends in her home; the more the merrier.

She was preceded in death by her parents; her husband; four brothers; Robert, Jim, Clark and Edward, two son-in-laws, Dave and Tony; two sisters-in-law, Audrey and Mary; and a brother-in-law, Ric.