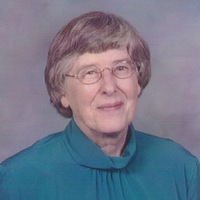 Frances Lee Nixon, 89, of Moville, Iowa, passed peacefully from this life to the next in the early hours of the morning on Saturday, October 17, 2020.

A celebration of life will be held 1:00 p.m. Saturday, July 10, 2021 at the First United Methodist Church in Sioux City. Waterbury Funeral Service of Sioux City is in charge of arrangements.

Frances attended North High School in Omaha and the Ames Ave. Methodist Church where she met the love of her life, James Daniel Nixon. A fortuitous encounter at the Reed’s Ice Cream Shop led to an evening at the cinema and ultimately to Jim and Fran sharing over 68 years of marriage. They were joined in matrimony at the Methodist Church in Blair Nebraska on a snowy January 4th, 1952.

While Jim was off in the Navy, Frances attended the University of Omaha and then worked at Woodman of the World. Jim and Fran had three red-headed boys: Bradley James (Margo), Brian Anders (Melania) and Joel Alan (Cara). In addition to Jim and the boys, Frances is survived by five grandchildren: Jimi, Zach, Levi, Matthew and Audrey. Frances also is survived by Pookie, her loving cat who was never far from her lap.

Over the years, Jim and Fran made homes in Oakland, CA; Olathe, KS; Omaha, NE; Sioux City, IA; and for the past 25 years, Moville, IA.

Frances was the epitome of a home-maker and an avid cook. She read cookbooks the way most people read novels. Frances delighted in making simple family meals and elaborate holiday feasts. A lifelong collector, her house is filled with a menagerie of beautiful knick-knacks.

Frances lived her life for others and was truly an example of how to live life with grace and love. Throughout her life Frances touched the hearts of many and was treasured by many as a dear and close friend. Even during her final days Frances showed more concern for others than for herself. Some of her final sentiments were, “This is not a time to be sad but a time to be grateful. I’ve had such a wonderful life: a loving husband, great children and so many good friends.”

Frances had a strong Christian faith. She believed home was where each lives for the other and all live for God. Frances was a longtime member of MK PEO and was active in her United Methodist Women’s Circle.

The family wishes to express its appreciation for the loving care provided by Care Initiatives Hospice and memorials will be directed to them.