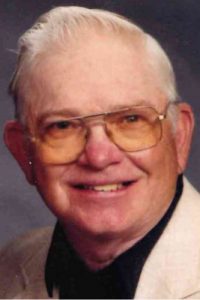 Services will be 3 p.m. Saturday at Sloan Community Church of Christ at 502 Beall Street. Visitation will precede the service starting at noon with a luncheon immediately following. Interment will be at a later date. Arrangements are under the direction of Waterbury Funeral Service of Sergeant Bluff.

Jim was born on June 12, 1932, to Harry and Julia (Dahl) Goodwin of Sloan, Iowa. He attended Sloan High School and graduated in 1950. He participated in baseball and was a varsity cheerleader.

Jim spent the majority of his life as a meat cutter. He worked for the Watson Locker Plant and then owned Jim’s IGA in Sloan. He also sold Kent Feed in Sloan and in Anthon, Iowa.

He was active in his community by serving as a church board member, cemetery board member, city councilman, and Sloan Golf Course board member. His interests included hunting, fishing, golfing, boating, dancing and wintering in Weslaco, Texas.

In 1951, he married Donna Dula of Salix, Iowa. They celebrated their 70th anniversary on June 10, 2021, with a large family reunion in Okoboji, Iowa. Jim loved to celebrate milestones in his life with his family and friends.