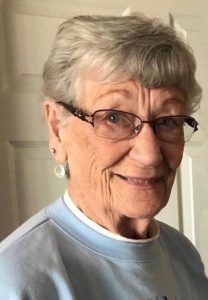 In lieu of flowers, memorials are preferred.

Mary Ellen Dammann was born on July 5, 1931 in Smithland, Iowa, to Rose (Coleman) and Edward Greene and passed away on July 7, 2021 at approximately 6:00 pm at her residence in Fieldcrest Assisted Living Community at the age of 90 years and 2 days.

She had been a resident of Fieldcrest Assisted Living for the past 5 years after selling her home in George.

She was known as Mom, Grandma, and Gma to her family.

Mary was raised in Anthon, Iowa. She attended grades K-12, graduated high school and went on to play basketball on a scholarship at Iowa Wesleyan College in Mt. Pleasant, Iowa while receiving her teaching degree in physical education, English, and science.

She moved to George in 1955 where she began her teaching and coaching career. It was here that she met her husband, Orval “Butch” Dammann, who liked to joke with his army buddies that he would have to go home after the Korean War to marry that girl since nobody else would!

Mary taught K-12 physical education and coached basketball until she realized that she could no longer vault over the side horse. At that turning point she decided to go back to the classroom to teach middle school Language Arts. She taught her entire career in the George Community School and retired after 31 years of service. She and Butch continued farming until his death in November 1998, after 42 years of marriage.

Mary spent her retirement years enjoying life activities. She enjoyed stretching her acting skills by taking part in the local Otter Valley dinner theater, playing many rounds of golf, bowling, and earning a nickname as being one of the traveling “Golden Girls” with many travel escapades.

She leaves behind her two daughters, 3 cherished grandchildren, Tracie Lohrman of Sioux Falls, SD, Justin Groen of Sheldon IA, Michelle Thornton of Johnston IA, along with 3 great-grandchildren, Micah and Aubrey Lohrman, Nora Thornton, and Baby Thornton on the way.

Mary was preceded in death by her parents, her husband, and her brother Edward.