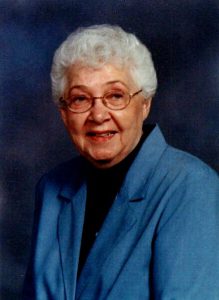 Bonita J. Diamond, 93, of Pleasant Hill passed away peacefully on Saturday, July 10th, with family members at her side.

A celebration of life will be held on Saturday, July 17, at 1:00 p.m. at Oakwood United Methodist Church in Pleasant Hill. Following the service, there was a fellowship time with a dessert bar to celebrate a sweet woman who had a fondness for sweets. Interment and graveside service will be held Tuesday, July 20, at 2:00 p.m. at Oak Hill Cemetery in Anthon, Iowa.

Bonita was born on May 5, 1928, in Battle Creek, Iowa, the daughter of Max and Katie (Haack) Spiese.

She learned the value of hard work early in life, working at the Luna Theatre and local drug store in Battle Creek during her teen years.

After graduation from Battle Creek High School, Bonita attended Iowa State Teachers College in Cedar Falls and then accepted a teaching position in Anthon, Iowa, where she met her future husband. Bonita was united in marriage to Donald Diamond on May 22, 1949, and they celebrated their 60th wedding anniversary just prior to Don’s death in 2009.

In the early years of their marriage, Don and Bonita owned and operated a grocery store in Anthon. Don later started in the insurance business, and in 1969 the family moved to Marshalltown, Iowa, where Don ran an insurance agency, with

Bonita helping in the office work and keeping things organized.

Bonita was an awesome mother who tolerated her children’s desire to have pets. Over the years, the family had several cats and dogs as well as two horses, a baby calf, chickens, ducks, and several pigs. She leaves a legacy of children and grandchildren who love animals and numerous funny family stories related to these pets.

In her later years, Bonita enjoyed her role as grandmother and great grandmother. She never passed up a chance to hold a baby. She often mentioned her gratefulness for her immediate family as well as her large and close family of origin, with nine children who all pitched in and got along!

She was preceded in death by her parents; her husband; a great grandson, Dillon Diamond; her brother, William “Bill” Spiese; and her sisters, Maxine Feddersen, Marjorie Hansen, Katherine Kistenmacher, Mildred Ernst, Alice Miller, and Linda Mattson.

In the middle of the 2020 pandemic, Bonita moved in with her daughter in Pleasant Hill. Our family gives special thanks to her Home Instead caretaker, Teresa, for her compassionate caretaking and warm companionship.

Memorials can be made to a favorite cause or the ALS Association Iowa Chapter, Muscular Dystrophy Association of Iowa or Taylor House Hospice (all past supports to our family).