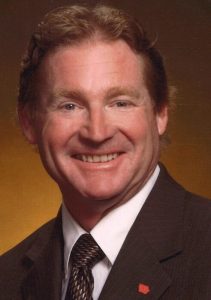 A funeral service was held on Monday, August 9, 2021 at 10:30 a.m. at the Trinity Lutheran Church of Sioux City with the Rev. Scott C. Egbers officiating. Burial will be held at the Arlington Cemetery of Moville. In lieu of flowers, memorials can be made to the Masonic Trial Lodge #532 of Moville. The Nicklas D. Jensen Funeral Home of Moville is in charge of the arrangements. Online condolences can be made at nicklasdjensenfh.com

Douglas E. Walker was born on April 12, 1959 in Fort Bragg, North Carolina to Russell and Muriel (Petersen) Walker. His family moved to Moville when he was a young boy, and he graduated from Woodbury Central High School in 1977.

Doug was married to Leslie Rae Cook on January 16, 1982 at the Trinity Lutheran Church of Sioux City. They were blessed with two sons, Benjamin and Joseph. They raised their family in Moville.

Doug worked at Knoepfler Chevrolet in Sioux City as the Collision Center Manager for 35 years. He was a member of the Masonic Trial Lodge #532 of Moville, the Abu Bekr Shriners, the Scottish Rite, and the ManKind Project.

He belonged to the Trinity Lutheran Church and the Meadows Country Club and served on the Moville Volunteer Fire Department for many years.

Doug was an avid Harley-Davidson biker and an exceptional golfer. He enjoyed tinkering in his shop or “man cave” and traveling with Leslie around the world. He especially enjoyed spoiling his two granddaughters Hailey and Quinn. He will be remembered for his great sense of humor and for the love he had for his family and friends.

He is survived by his parents, Russ and Muriel Walker; sons, Ben and wife Becca Walker of Lawton, IA and Joe Walker of Sioux City, IA; grandchildren, Hailey Walker, Quinn Walker and Sam Keith, with another granddaughter due any day; his brother, Drew and wife Linda Walker of Morse Bluff, NE; his sister, Cynthia and husband Steve Martin of Tracy, CA; and many nieces and nephews and their families.

Doug was preceded in death by his wife, Leslie.