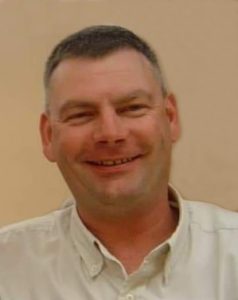 Thomas Kent “Tom” Ashley, the son of Charles “Edward” and Constance “Connie” (Lewis) Ashley, was born on January 12, 1967, in Sioux City, Iowa. He grew up in Anthon, Iowa, and graduated from Anthon-Oto High School with the class of 1985. While in school Tom enjoyed participating in band & sports.

After graduation, Tom enlisted in the United States Army. He completed his basic training at Fort Sill, Oklahoma and following in his father’s footsteps was stationed in Anchorage, Alaska. When his service was completed, Tom was honorably discharged and began his civilian career as a licensed electrician. He worked as an electrician for several companies in northwest Iowa.

For the past 12 years, Tom worked for Dave’s Electric Company owned by his friend and boss, Dave Kunkel, in Hinton, Iowa.

He was known by his family and friends for his wry sense of humor and tender heartiness for all animals. He also loved to golf and creatively fine ways to reuse and repurpose items.