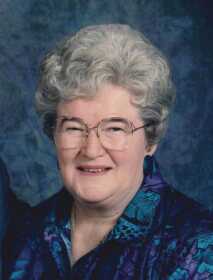 Shyrl was born on July 4, 1934, in her family’s home in Banner Township, rural Lawton. Her parents were Everett and Leona “Onie” (Ford) Harrison. She attended Banner Township #1 Country School and later high school in Lawton, graduating in 1953.

On July 5, 1953, she married Russel Daniel. They moved to El Paso, Texas, while Russ was in the Army. When he was deployed overseas, she returned to Sioux City where she attended National Business Training College and worked at Schindler’s Jewelers. She also was a bookkeeper for the family business, Oliver Implement.

After farming in Akron, for a year, and after Russ’s retraining, the couple lived in Omaha for five years and then in Columbus, Nebraska, for another five.

They settled in Merrill from 1966 until they moved to Le Mars in 2004. During these Iowa years, Shyrl worked at Hotopp Jewelers and Farm Service in Le Mars, and for 30 years worked as a teller at Farmer’s State Bank in Merrill, retiring in 1998. In 2014 she moved to Arkansas.

Shyrl’s interests include wildlife — especially deer and birds. She loved dogs, especially Taffy. She loved flowers and camping. She also enjoyed sewing and other handcrafts. Attending the children’s many concerts and plays and sporting events extended from one generation to the next.

The Merrill United Methodist Church was a home away from home. Shyrl taught Sunday School, sang in the choir, enjoyed and presided over the Women’s Guild, and served in many other ways.

Shyrl was preceded in death by her husband, parents, father-in-law and mother-in-law John and Gladys Daniel, brothers Donald, Morris and Dale Harrison and sister Carol Green, and grandson Phillip Fensterman.

In lieu of flowers, memorials can be made in Shyrl’s name to the Merrill United Methodist Church, Le Mars Municipal Band, and/or the Plymouth County Fair.

Celebration of Life Service will be 2 p.m., Saturday, Aug. 14, at Merrill United Methodist Church in Merrill. The Reverend Lisa Millen will officiate.  Burial will follow in Stanton Township Cemetery, rural Plymouth County. Visitation with the family present will be from 1 p.m. until service time on Saturday at the church.

Local arrangements are with the Rexwinkel Funeral Home in Le Mars.

Expressions of sympathy can be extended to the family through  www.rexwinkelfh.com.