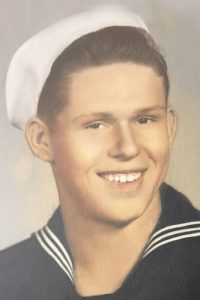 Memorial Mass was at 10:30 a.m. Tuesday, September 7, 2021, at Immaculate Conception Catholic Church in Moville. Visitation was held one hour prior to the service at the church. Burial will be at Westfork Township Cemetery in Climbing Hill. Christy-Smith Funeral Homes, Morningside is assisting the family with services.

James Howard Cox, the son of Ralph and Rose (Maslonka) Cox was born November 14, 1926, in Winnebago, Nebraska. He grew up in Thurston County, Nebraska and graduated from Thurston High School.

Following graduation he enlisted in the United States Navy, going on to the Great Lakes Naval Station in Chicago for training. He then was stationed in the Philippines preparing to invade Japan during World War II.

Upon his honorable discharge from the Navy, he returned to Thurston County and began farming. James was united in marriage to Fauneil Jepsen on February 4, 1948. In the spring of 1952, the family moved to Bronson, where James farmed until retirement.

He belonged to the Knights of Columbus, Thurston American Legion, and he served on various boards throughout the area. He enjoyed traveling and RV trips, and he spent many winters in South Texas.

He was preceded in death by his parents; his son-in-law, Mike Botdorf; a sister-in-law and her husband, Mardell and Sunny Sorensen.