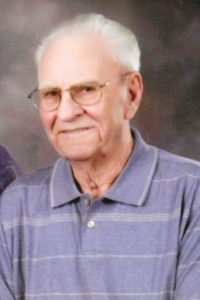 Services were held at 3 p.m. on Friday, September 3 at the Rohde Funeral Home in Kingsley. Burial will be at Kingsley Cemetery. Visitation began at 9:00 a.m. Friday with family present from 1:00 to 3:00 p.m. at the funeral home. Online condolences may be sent to rohdefh.com.

Jack was born Oct. 8, 1922, the son of Harvey and Nellie (Bainbridge) Bowman. Jack went to country school until eighth grade, at which time he attended Union High School, graduating in 1940.

On Sept. 27, 1942, he and Helen McCain were united in marriage at the Lutheran parsonage east of Hinton, Iowa, by Rev. Stohmer. They lived with Jack’s folks for four years, helping Jack’s father with the farming.

At the age of 12, Jack was allowed to miss school during planting season because his father Harvey had limited eyesight. This was a special time that always brought special memories to Jack. When Jack’s folks moved to town, Jack and Helen moved back to the Gates farm and lived there for 29 years.

Following their retirement in 1988, they moved to Kingsley where they resided during their retirement. He enjoyed playing cards throughout his life and would play cards daily at the Masonic Hall after moving to town. Jack was a lifelong member of the Methodist Church.

Jack was preceded in death by parents; his wife, Helen; three sisters and their spouses, Edna and Russell Carlson, Betty and Vance Spink, and Lois and Jerry Powell; and brother-in-law, Max Thomson.