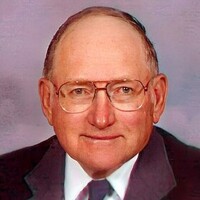 Keith Maynard Richardson was born July 28, 1935, in Le Mars, Iowa, the son of Weston and Emma (Johnson) Richardson. He attended country school until 8th grade and graduated from Kingsley High School in 1953. He attended McPherson College; then enlisted in the U.S. Army in 1955.

He was joined in marriage to Marilyn Clausen on April 27, 1955. After his discharge from the service in 1957, Keith and his family returned to the Kingsley area where he worked as a farmhand.

Upon his father’s retirement in 1968, Keith and his family moved to the family farm which Keith farmed until 2011. Keith and Marilyn moved to their present home in Kingsley upon retirement. Keith also worked part-time at the Kingsley Elevator and the local sale barn.

Keith enjoyed many years of horsemanship with family and friends, helping to organize the Rocking K Saddle Club in 1965. He enjoyed using his team of horses or mules to farm and demonstrate how farming was done in the past.

He was a member of the KP School Board, township assessor, 4-H leader, and horse show announcer, and he held various church offices.

Keith was preceded in death by his parents; his parents-in-law, Bill and Marcella Clausen; a sister and her husband, Ruby (Robert) Kabisch; in-laws Clair Clausen, Sharon Clausen, Larry and Marcia Walker; and a great-grandson, Kegan Collins.