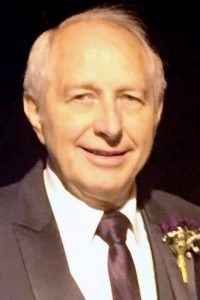 Funeral services will be held on Saturday, September 4th, at 10 a.m. at the Boothby Funeral Home in Cherokee, Iowa. Pastor Pinky Person and Father Daniel Rupp will officiate. Burial will be in the Sunset View Cemetery at Washta, Iowa. There will be a family prayer service at 9:45 a.m. at the funeral home on Saturday. Visitation will be on Friday, September 3rd from 2 p.m. until 7 p.m. with the family present from 5 p.m. until 7 p.m. at the Boothby Funeral  Home in Cherokee, Iowa. The service will be livestreamed on the Boothby Funeral Home website with the assistance of Fuller Digital Solutions. Online condolences can be left at www.boothbyfuneral.com

Mike was born June 9, 1945 at Sioux City, Iowa to Manfred and Bernice (Eatinger) Hanson. He graduated from Willow High School in 1963.  He attended the University of South Dakota, graduating with a Bachelor’s degree in Business in 1967.  He married Mary Ann Baumann on May 18, 1968 at St. John’s Catholic Church in Quimby, Iowa.

He enlisted in the United States Air Force, serving his country from 1968 to 1973.  He was promoted to Captain and was a navigator of a KC-135 Tanker. Michael was stationed at Ellsworth AFB with tours overseas in Southeast Asia.  He worked as a Commodities Broker for Ray Friedman and Company, Sales Representative for Vern-Anderson-Case IH, Gateway 2000 as a Computer Sales Representative, and also for Darrell Bunch and Associates as a Sales Representative.

He was preceded in death by his parents, an infant sister Marion Marie Hanson, a brother Mervin Hanson, brothers-in-law Larry Nelson and James Baumann, father-in-law and mother-in-law  Arthur and Eva Baumann.