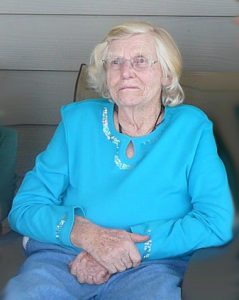 Helen Marie Enstrom, formerly of Hornick, Iowa, passed peacefully in her sleep, Tuesday, September 7, 2021 at the Care Initiatives nursing home in Kingsley, Iowa, at the age of 88.

Music selections were “Lo, How a Rose E’er Blooming” – Congregational, “Children of The Heavenly Father” – Congregational, and “Amazing Grace” – Congregational with Chrissy Martinez as pianist. Burial followed in the Fairview Township Cemetery, Albaton, Iowa. Visitation was 5:00 – 7:00 P.M. Monday, September 13, 2021 at the church.

A Celebration of Life Service is being planned in the spring of 2022. Arrangements were under the direction of Rush Family Care Service, Onawa, Iowa. Condolences may be left online for the family at www.rushfamilycareservice.com

Helen Marie was born on May 22, 1933, to Henry and Julia Fahning. Helen grew up with her four brothers on the family dairy farm just outside of Cleveland, Minnesota, near Mankato. She was very active in her church, school, and the local 4-H club. She graduated from Cleveland (Minnesota) High School in 1951.

Helen attended the University of Minnesota, graduating in 1955 with a degree in Home Economics Education. She also spent 4-5 months as an exchange student with the International Farm Youth Exchange in Germany, where she stayed with various host families, traveled throughout West Germany, and even ventured past Checkpoint Charlie into East Berlin.

Many will remember her pizzas from the Casey’s Store near the Southern Hills Mall in Sioux City, Iowa.

Helen is survived by her children and families; Karen Enstrom and Andrew Schofer with sons, Erik and Nils, Mark and Shira Enstrom with children, Tahlia and Anders, and Jon Enstrom with children, Shawn, Brenna, and Connery. Helen is also survived by brothers, Gerald Fahning, Dayton Fahning and wife Annette, Wayne Fahning and wife Marilyn; and sister-in-law, Lori Fahning.

Helen is preceded in death by her husband, Walter Enstrom; her parents, Henry and Julia Fahning; and her brother, Alan Fahning.