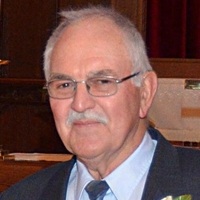 Ronald Wilson Ohlendorf was born on June 8, 1935, to Louis and Alice (Knight) Ohlendorf. He attended country school for his early education, then graduated from Kingsley Public School in 1953.

In 1955 Ron registered for the draft and served in the Army from 1955 – 1957 as a machinist. The majority of his service was spent in South Korea following the Korean War. Upon his honorable discharge from the service, Ron returned home to help with the family farm.

On September 20, 1959, Ron married his Shore Acres sweetheart, Doris JoAnn Dirks. Ron and Doris began farming in the Marcus area, moving twice before finally settling on their current farmstead a mile from where Ron grew up.

Ron and Doris spent their life together farming and raising their family. After Doris’ passing in 2016, Ron remained on the homeplace, continuing to farm with his daughter, Julie, up until the very end. Ron was a good man, a loving husband, and a beloved father and grandfather. He will be deeply missed.