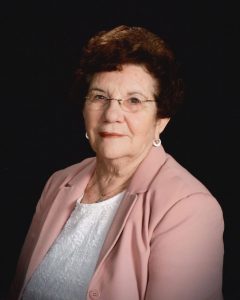 For those unable to attend, both services have been live streamed on the church’s website www.calvaryleeds.com.

Donna, the daughter of Luther M. and Helen E. (Morian) Edgington, was born November 25, 1933 in Walthill, Nebraska. She attended Walthill Public School then went to East High School in Sioux City for her junior year.

Donna returned to Walthill High School her senior year and graduated with the Class of 1951.

In October of 1951, she started working as a switchboard operator/supervisor at Northwestern Bell. In 1953, Donna survived the Floyd River Flood in Sioux City.

In the fall of 1953, Donna met Wilbur Eugene Lieber at the Tomba Ballroom in Sioux City. They were united in marriage on February 19, 1955 at Redeemer Lutheran Church and this union was blessed with five children.

In 1962, Donna left her job with the telephone company to raise her family on the family farm near Sioux City. From 1990 to 2000, she worked at JCPenney in the catalog and credit department.

She enjoyed sewing, upholstery work, gardening, and canning. Donna was an excellent cook who enjoyed making brownies and apple pies for her grandchildren.

In addition, she baked and decorated many cakes for different celebrations. She also enjoyed going on several trips with Wilbur, hosting neighborhood card clubs, shopping for a good bargain, playing cards with family, and going every Friday to get her hair done.

Above all, she cherished her family. She had a great memory and would acknowledge all of her family with birthday and holiday cards.

She was preceded in death by her parents; her husband of 65 years, Wilbur E. Lieber; one grandson, Dylan Eugene Eyres; one great-grandson, Isaac Connelly; and four siblings: Arlene, Ben, Don, and Roberta.