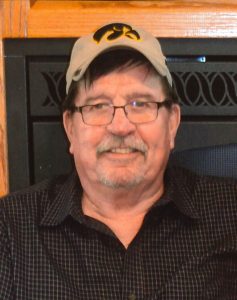 The Armstrong – Van Houten Funeral Home of Mapleton, Iowa, is in charge of the funeral arrangements. Condolences may be sent online to www.armstrongfuneral.com

Gary “Enier” Seuntjens, the son of Andy and Ann (Reimer) Seuntjens, was born on October 11, 1944, at St. Vincent’s Hospital in Sioux City, Iowa. He grew up on the family farm North of Danbury, Iowa. He received his education and graduated from Danbury Catholic School.

After graduation, Enier enlisted in the Army National Guard. After completing basic training, he served his country and was honorably discharged. Upon returning home Enier commenced in farming with his father Andy and later took over the farming operation.

Enier never knew a stranger and loved the art of conversation. Enier was a big Iowa Hawkeye fan and was always up for a good bet. He enjoyed his morning coffee with the Anthon crew, wintering in Palm Springs with Nancy, had a love of classic cars and old westerns (especially Gun Smoke), and treasured every moment of being called “Papa” by his grandchildren.