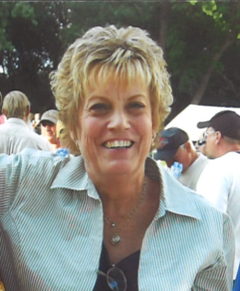 Linda S. Hogrefe, age 74, of Battle Creek, passed away on Thursday, September 23, 2021 at the University of Iowa Hospitals & Clinics of Iowa City.

Linda Susan Hogrefe was born on January 22, 1947 in Battle Creek, Iowa to Carl and Leonilla “Tootie” (Prokop) Sorensen. Upon graduating from high school, she attended beautician school at the Stewart’s School in Sioux City. Linda was self-employed as a hairdresser at Linda’s Cut and Curl. She retired in 2019 after 48 years.

She was united in marriage to Darrell LaDean Hummel on October 8, 1966. To this union two sons were born, Troy and Todd. LaDean passed away in 1997. Linda was married to Delane “Mouse” Hogrefe on September 19, 2009.

Linda was a member of St. John’s Lutheran Church of Cushing. She enjoyed crocheting; making a blanket for everyone in her immediate family. She liked playing Euchre and Left Center Right with family and friends. She and Mouse loved traveling in the ’55 Chevy, usually going to the casino to play the magical unicorn slot machine. She would often be found dancing and listening to old rock ‘n roll songs around a fire on the patio or in their three-season room.

Linda loved her family. Anyone who held a conversation with her would certainly be kept up to date with what was happening in her grandchildren’s lives.

She was preceded in death by her parents; her husband, LaDean Hummel; a brother, Arnold Sorensen; and her parents-in-law, Gladys and Darrell Hummel.