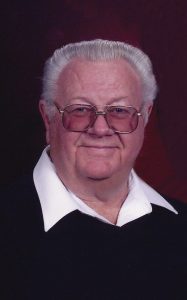 Calvin Jay Gothier was born August 13, 1940, in his current home of Anthon, Iowa. He was the eldest son of Everett Neeble and Mae Eugene (Griffith) Gothier. Calvin passed away peacefully of natural causes, surrounded by his family, on September 27, 2021.

Calvin grew up in Anthon and graduated from Anthon Public School in 1958. He participated in multiple sports, including baseball, basketball and track. After finishing high school, he attended Wayne State College for a year before returning home.

On November 26, 1960, Calvin was united in marriage to Joyce Evelyn Ashley at the United Methodist Church in Anthon, Iowa. The couple were blessed with two children: Rhonda Jeanne and Jeffrey Frank.

Calvin was an A.F. & A.M. Mason, a member of the Little Sioux Cycle Club, served as a 4-H Sheep Superintendent, volunteer fireman and Fire Chief, School Board member, community choir, and a member of the Anthon United Methodist Church, where he was in both the choir and the men’s ministry group. During the Anthon Centennial in 1988, he was head of the planning committee and Grand Marshal of the parade.

He carried on his love of sports as a catcher on an adult fast pitch softball team. Calvin and Joyce also supported the activities of their kids, grandkids, and great-grandkids, being regulars at the gym or ballfield cheering them on. Calvin liked attending rodeos, trail rides, and card parties and playing aggravation and cribbage with friends. He was an avid reader.

Calvin was a member of a farming family, where along with his dad, Everett, his uncle Donald Gothier, and grandfather, Col. Frank C. Gothier, they operated the largest mink ranch in the United States. He also raised Black Angus cattle with farms in South Dakota and Iowa. He retired in 2005 after suffering a stroke.