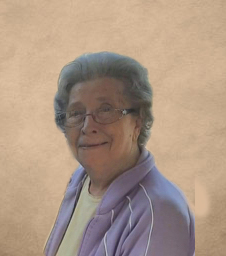 Private Services will be held in Memorial Park Cemetery of Sioux City, Iowa. The Armstrong – Van Houten Funeral Home Anthon, Iowa is in charge of the funeral arrangements. Condolences may be sent online to www.armstrongfuneral.com.

Ingeborg Christa Roggatz, the daughter of Irwen and Gertrude (Bruhn) Kuhtz, was born on March 14, 1937, in Berlin, Germany. At the age of 15, Ingeborg and her mother Gertrude relocated to the United States, where they settled in Anthon, Iowa.

On November 4, 1956, Ingeborg was united in marriage to LaVern Roggatz in the St. John’s Lutheran Church of Climbing Hill, Iowa. The couple welcomed two children: Dennis and Kathy. Ingeborg and LaVern made their home on the family farm between Anthon and Oto for the next 41 years raising crops and livestock.

In 1981, Ingeborg started a career at Countryside Healthcare Center of Sioux City, Iowa, as a cook in the kitchen. She was an accomplished cook and enjoyed making a variety of dishes.

In 1997, the couple retired from farming and moved into the town of Anthon.

Ingeborg liked to crochet, knit, sew, and do needle point. She also enjoyed gardening and canning the fruits of her labor to later be used in her cooking. Family was very important to Ingeborg and she relished in every moment she was able to spend with them.
Ingeborg was preceded in death by her parents Irwen and Gertrude Kuhtz; brother Wolfgang Kuhtz (age 2); husband LaVern Roggatz; and daughter Kathy Ryan.
She will live on in the hearts of those left behind, son Dennis “Denny” and wife Lori Roggatz of Bronson, IA; son-in-law Pat Ryan of Sloan, IA; grandchildren Jayme (Ben Clark) Uhl of Bronson, IA, Austin and wife Brandee Roggatz of Waukee, IA, Dusty (Andrea Willroth) Roggatz of Sioux City, IA, Joshua Ryan of Sloan, IA, and Zackary Ryan of Sioux City, IA; great-grandchildren Victoria Ryan and Peyton Roggatz; extended family and friends.