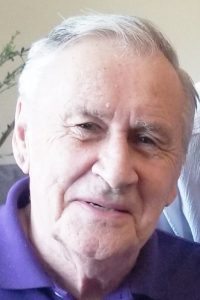 Larry Gene, the son of Elmer and Edna (Thiesen) Manker, was born on a farm near Kingsley, Iowa. He went to country school at Moville and then Pierson High School. Larry attended Lawton High School in his junior year and graduated with the class of 1953. After high school, he volunteered for the draft and served in the United States Army until his honorable discharge. Larry attended Morningside College where he received a Bachelor of Science degree in Business Administration in 1960.

On Oct. 19, 1956, Larry was united in marriage to Sally Elaine Anderson at the Lawton Presbyterian Church. This union was blessed with three children. Larry’s banking career started at Morningside State Bank. In 1964, he went to work for First Federal Savings and Loan and retired in 1989. In retirement, Larry took on the role of CEO at several troubled savings and loan companies in Iowa and Minnesota.

Larry had many hobbies and passions in life including: boating, bowling, fishing, hunting and golfing. Throughout the years, Larry and Sally enjoyed square dancing and playing cards with several card clubs. After retirement, he spent his time with friends having coffee at HyVee and playing cards at the Point After. Above all, he cherished spending time with his family and grandchildren, he loved attending their many activities.

He was preceded in death by his parents; two sisters Nona Kay in infancy and June (Bill) Corbin; and one brother Gaylen Manker.

In lieu of flowers memorial contributions can be made to Faith United Presbyterian Church.