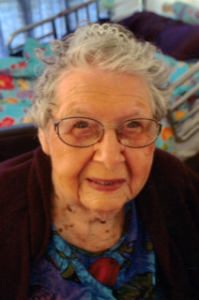 Lois Harrison Foster Denham, age 100, of Sioux City, passed away on Monday, October 4, 2021 at her home of Sioux City.

Lois went to Heaven to be with her Lord Jesus on Monday, Oct 4th. As she lived for 100 years, her life had several phases.

She was born on Aug 15th, 1921 on the Harrison family farm in Banner Township, Iowa. She was an only child but she grew up playing with her many cousins.

Her school years started at Banner #1, a country school, near her home. When she finished the 8th grade she went to Lawton High School, graduating in 1939. The following summer, she took summer classes at Buena Vista College, during that summer she was baptized into the Christian faith and became a member of the Methodist church in Storm Lake. She completed her B.A degree from Westmar College in 1959.

Lois started her career in education in 1940 at Banner #5 and continued teaching in Bronson, Kingsley, and Sioux City before retiring in 1977.

Lois married Douglas Foster of Moville, Iowa on October 28, 1944. Virginia, their only child was born Dec 4th, 1946. This marriage was shortened when Doug died from polio in 1952.

Lois married Ray Denham of Battle Creek, Iowa in 1965. He died in 2009. Lois was blessed with many step-children, grandchildren and great-grandchildren from this marriage. Lois loved her family and was a precious example of a Godly woman. She trained her child well and taught Bible studies and Sunday School for several years.

She had several hobbies, including writing poems and short stories, and she released a self-published book. She also wrote articles for The Moville Record.

She traveled extensively in the U.S, however her favorite trips were to Israel in 1980, 82, and 84 where she was baptized in the Jordan River and rode a boat on the Sea of Galilee. She loved to paint and she spent two weeks one summer painting mountain scenes in Colorado while taking an art class. These were the favorite of her paintings.