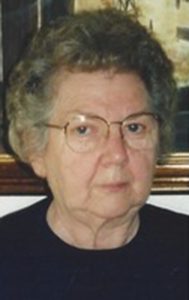 Graveside memorial services for family and friends will be held at on Saturday, October 30th at  11 a.m. at the Sunset View Cemetery in Washta, Iowa. Pastor Barb Dinelli will officiate. There will be lunch and a time of fellowship at the Washta United Methodist Church following the graveside service. The Boothby Funeral Home of Cherokee, Iowa is assisting the family with arrangements. Online condolences may be left at www.boothbyfuneral.com.

Donna was born on April 19, 1927 on a farm east of Washta, Iowa, the daughter of Loyd and Mary (Ralston) Burns.  She graduated from Wilson High in Cherokee.  She attended the Iowa Beauty School of Des Moines and graduated in 1947.

She married Arlen Tucker on May 16, 1947 at Des Moines, Iowa.  They moved to Sioux City in 1957 and then settled in Washta in 1976.  She worked for the Cherokee Mental Health Institute.

Donna was a member of the Washta United Methodist Church.  She served on the Washta Library Board for several years.  She belonged to the Washta Senior Citizens group and a neighborhood card club for many years. .  Donna was very active with the Washta Cemetery Association.  Donna loved playing cards and solitaire on her iPad and enjoyed time reading her Bible.