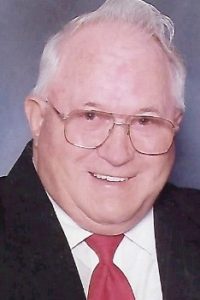 Service were at 10 a.m. on Monday, October 18 at Meyer Brothers Morningside Chapel in Sioux City. Burial will be at Memorial Park Cemetery. Online condolences made to www.meyerbroschapels.com.

Ervin was born in Dixon, Nebraska, on July 1, 1929, to Ena (Bauman) and Werner Koeppe. Ervin married Lucille Nobbe on Nov. 24, 1954, at Trinity Lutheran Church in Martinsburg, Neb. They lived in the Ponca and Martinsburg area until the early 1970s when the family moved to Lawton.

Ervin worked a variety of jobs over the years. He competed on the rodeo circuit from 1953-1956 as a bull rider. He was a farm hand from 1954-1968 in the Lawton and Laurel, Neb., areas. Ervin started at Iowa Beef Processor (IBP) in 1968 and worked there until 1996. In 1996 he began working at the Sioux City Airport as a member of their security team and left in 1999 when Ervin and Lucille moved from Lawton to Guthrie Center.

In his spare time Ervin enjoyed competing in and watching local tractor pulls. He also had a special love for baseball that involved watching and playing the game. The most important thing he enjoyed though was Nebraska Football. Ervin’s face would light up anytime someone would give him a new Husker item.