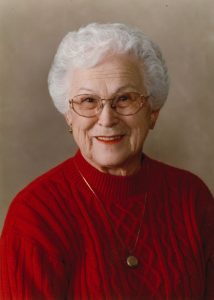 Rose Elizabeth Cloud was born on November 19, 1923, in rural Mapleton, Iowa, the daughter of Eugene and Mary (Dergans) Wimmer. She graduated from St. Mary’s Elementary Catholic School in 1937 and Mapleton Consolidated High School in 1941.

After graduation she worked for two years as office secretary for Superintendent Bert Vander Nald and at First State Bank in Mapleton during the summer months. In August 1943, she became employed at the Farmers Savings Bank in Danbury, Iowa, working there until 1946.

Rose was united in marriage at St. Mary’s Catholic Church in Mapleton on January 22, 1946, to Wilbert J. “Shorty” Cloud, who had returned from overseas duty in the Army Air Corps during World War II. Shorty served his country from 1941 to December, 1945.

Rose and Shorty started farming in 1947 and lived in the Mapleton, Anthon and Oto area, moving to the farm they purchased at Oto in 1971 and farming there until 1985. They continued living on the farm until 1995 and then retired to their home in Mapleton. They were faithful members of St. Mary’s Catholic Church.

She and Shorty were happy raising their family on the farm with everyone helping with the chores, especially milking the cows.