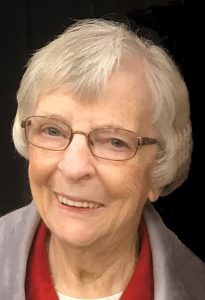 MaryAnn Carol Zenor, 93, of Lawton went to be with her Lord on October 17, 2021. She passed peacefully at a local hospital with family members at her side.

Funeral Services will be held at 10 a.m. Monday, October 25, 2021 at Bethel Lutheran Church, 322 Pine St., Lawton, Iowa. Burial will be in Banner Township Cemetery in Lawton. Visitation will be at Bethel Lutheran Church on Sunday from 5 to 8 p.m., with a prayer service at 7 p.m. Arrangements are under the direction of Meyer Brothers Morningside Chapel in Sioux City. Online condolences may be shared at www.meyerbroschapels.com. In lieu of flowers, memorials may be directed to Sunrise Retirement Community, 5501 Gordon Dr. East, Sioux City, IA 51106.

Since kindergarten was only held every other year, MaryAnn began first grade at age four. She enjoyed every part of school and graduated as valedictorian of the Lawton High School class of 1945 when she was 16.

MaryAnn met Bernard Roy Zenor in confirmation class and they were high school sweethearts. She married Bernard on March 3, 1946, and they were blessed with three children: Mort, Susan and Lindy. The couple farmed just outside of Lawton until 2006 when they moved into Lawton. MaryAnn loved her neighbors and was grateful for the connections she made with them and their families.

MaryAnn would say her first job was always as a farmer’s wife and homemaker. She also worked as a substitute kitchen aide at Lawton-Bronson Elementary School for several years, and she was active in the Lawton Variety Club, the Dancing Grannies and Grandpas, a local bunco group and the Lamplighters ministry that visited senior care centers.

A longtime member of Bethel Lutheran Church, MaryAnn was a founding member of Bethel Lutheran’s Ladies Aid. She was active in Bible studies, Lutheran Service Auxiliary and other church committees. For many years she led music for the children’s Sunday school, Bible school and Christmas programs. In the late 1970s, she introduced the congregation to “Happy Birthday, Gentle Savior,” a song that is still a Christmas favorite at the church. MaryAnn had a strong and beautiful voice, and she enjoyed singing harmony whether sitting in the pew on Sunday morning or joining voices with other family members to sing for church and other local events.

MaryAnn was a wonderful cook and liked trying new recipes. She also enjoyed music, house plants, gardening, doing puzzles and playing cards, dominoes, Rumikub and especially Scrabble. She was very good at crosswords and completed one nearly every day.

For the past three years, MaryAnn spent her winters in an assisted living apartment at Sunrise Retirement Community, and she had recently chosen to move there on a permanent basis. She enjoyed daily activities and greatly valued the friendships she formed there.

In this life, MaryAnn most cherished time with family, whether enjoying a meal around the kitchen table, taking fishing trips in Minnesota, traveling to Florida to visit her daughter, attending activities of her grandchildren and great-children or spending time with the people closest to her heart.

Above everything else, MaryAnn loved Jesus and was eager to meet Him in heaven. Her favorite Bible verse was Matthew 6:33.