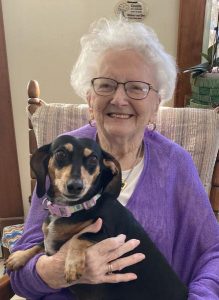 A Celebration of Life Service will be held at 2:00 p.m., with visitation one hour prior from 1:00 p.m. to 2:00 p.m., on Saturday, November 20, 2021, at the Arthur Evangelical Free Church, of Arthur Iowa. Pastor Dave Schultz and Pastor Jim Thomas will officiate.

The Christensen-Van Houten Funeral Home of Ida Grove, Iowa, is in charge of the funeral arrangements. Condolences may be sent online at www.christensenvanhouten.com

On December 7th, 1925, Oskar and Theresia Hammer welcomed their new baby daughter, giving her the name Elfriede Paula. She was born in the beautiful city of Nuremberg, Germany. She was four years younger than her only sister Paula. Elfriede had a very full childhood. Her words were “I had a very sunny youth.” She loved her courtyard, sandbox, and roller skating. It was about the age of 10 that she joined the Hitler Youth, but after four years her father told her she could no longer participate due to his increasing resistance to the Nazi regime. In the mid-thirties the tough times began. In 1940, Elfriede’s father was in the hospital with war injuries. He had begun to recover, but when they went to pick him up the next day he had died, with no explanation.

Elfriede would say of her mother, “She was the sweetest and strongest person I knew. She could do anything she set her mind to.” Her mom’s purpose became providing for her daughters, and lots of extended family, especially after the bombing began in 1941 and many of them came to live with their family. Theresia first worked for other people but eventually owned her own beauty shop with several girls working for her. She worked hard to attain the license that would allow her to employ others. When the first shop she owned was bombed out, she bought another one and started again.

After the tragic loss of her father and many other family members, the year 1946 would bring great joy and new love into her life. In the spring of ’46, Fred Arthur Paulsrud arrived in Germany and began working at the opera house where Elfriede was a secretary. She described him as “Our new boss!” On a furlough to Switzerland, Fred bought a ring and proposed to her, just before he got orders to return to the States in December of ’46. After jumping through many hoops including dealing with the German army, medical check-ups, and many excuses every month for why they didn’t have her papers ready, the day finally came. Imagine her relief and gratitude when in September of 1947, she was off to America. She flew to New York City and arrived “feeling like a lost sheep” as she passed through immigration. Fred met her at the airport and on September 30th, 1947, Fred and Elfriede became husband and wife at the 5th Avenue Presbyterian Church in New York City.

After their marriage they embarked on a cross-country road trip from New York, passing through Pennsylvania, visiting family in Iowa and arriving in Los Angeles to Fred’s family and hometown.  Fred and Elfriede moved many times after California, to Oregon, South Dakota, and Nebraska, finally settling in Iowa in 1954.  Throughout Elfriede’s life she was involved in Ida County Extension Service, a 4-H leader, Danbury Women’s Club, PEO, Eastern Star, Garfield Country Club, Country Ladies Quilting Club (or as the grandkids called it, the Fancy Ladies Club), Ida County Republicans, UMW, Farm Bureau, delegate to the State Republican Convention, Ida County Cattlemen, Ida County Pork Producers, and other local/community activities.  Elfriede most enjoyed her time as wife, mother, grandmother, great-grandmother, and spending her life surrounded by her family.  She was an avid gardener and loved tending her flower beds.  In her golden years, her stubborn German roots often were seen in her fierce independence to continue taking care of the house and gardens long past what common sense would have suggested wise.  The four o’clock coffee tradition was well known and loved by all the family and extended to many friends over the decades.

On November 12, 2021, Elfriede peacefully passed from this life to be united with her Savior in heaven while surrounded by the family she loved so dearly.

She was preceded in death by daughter Mary, son Art and her sweetheart and love of her life, Freddy, as well as her parents, sister, and brother-in-law.