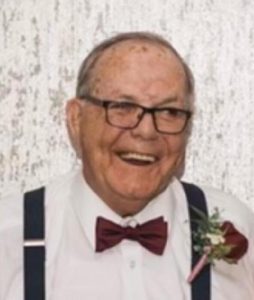 A funeral Mass will be held on Saturday, December 4, 2021 at 11:00 a.m. at the St. Peter Catholic Church of Defiance, IA with Fr. Randy L. Schon officiating.

Burial will be held at the St. Peter and Paul Catholic Cemetery of Defiance with military rites conducted by the American Legion Post # 707 of Defiance and Westphalia. A visitation will be held one hour prior to the service at the church. The Nicklas D. Jensen Funeral Home of Moville is in charge of the arrangements. Online condolences can be made at nicklasdjensenfh.com

Harold P. Kloewer was born May 19, 1934 in Defiance, Iowa to Peter Frank and Elizabeth Catherine (Goetzinger) Kloewer. He was baptized and confirmed at St. Peter’s Catholic Church in Defiance. He attended grade school and high school at St. Paul’s, Defiance, graduating in 1952. He served in the United States Marine Corp, in Japan from 1952-1954.

Harold was united in marriage to Mary Lou Martin on October 20, 1962. To this union two daughters were born, Melissa and Michelle. In 1969 the family moved to Papillion, Nebraska.

During his lifetime Harold worked as a farm laborer, for Goetz Trucking and for the United States Post Office. Harold retired from the USPS in 1994 and moved to Moville, Iowa. He was married to Lois Corey Martin on May 14, 1994. He was a longtime member of the Knights of Columbus and Wink Sparks Post #303 of Moville.