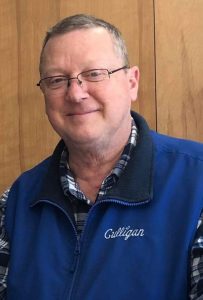 Jerry Klaschen, 68, of Pierson, Iowa, passed away Saturday, November 27, 2021, at Unity Point Health – Sioux City, IA with family at his side after battling complications with COVID 19.

Memorial services will be held at a later date. Rohde Funeral Home is assisting the family with arrangements.

Jerry was born in San Diego, California on November 2, 1953, to Donald and Ellen (Powell) Klaschen. He grew up on a farm near Pierson, Iowa the oldest of 8 children. He graduated from Kingsley Pierson Community School in 1972 and attended Wayne State College for Art.

He married Sheila McQueen on September 8, 1979, at Salem Lutheran Church, Correctionville, Iowa. Shortly after their marriage, Jerry became involved in McQueen’s Culligan Soft Water of Pierson, Iowa. He was known throughout the community as “The Culligan Man” and served in various roles of the business until the time of his death. Jerry also worked at the Gas Lantern in Pierson for several years.

Jerry was an active member of the Pierson community where he had previously served on the City Council. He was also a retired EMT with the Fire and Rescue Squad.

Jerry and Sheila loved spending their free time camping. The last several years , he enjoyed his semi-retirement by taking his mom camping most weekends from April through October to Lakeside Campground on Storm Lake. His favorite part of camping was boating, fishing, campfires, and Saturday morning bakery visits. Jerry loved how camping brought family and friends together.

He was proceeded in death by his father, Donald Klaschen; father and mother-in-law Daker and Theresa McQueen; grandparents John and Martha Klaschen and Dale and Marjorie Powell; brother-in-law, Thomas Considine; sister-in-law, Dottie Klaschen, and nephews and nieces Dustin Dalton, Austin and Casey Klaschen and Kristen Considine.