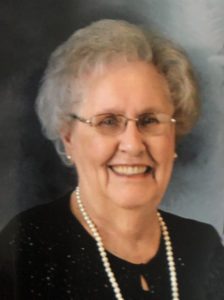 Marian Josephine Sevening, the daughter of Bernard and Eva (Sharkey) Karhoff, was born on April 19, 1927, in Danbury, Iowa. Her family later moved to Anthon where she attended St. Joseph’s Catholic School and graduated from Anthon Public School with the class of 1945.

After graduation, Marian furthered her education with Normal Teachers Training at Morningside College in Sioux City, Iowa, where she earned her teaching certificate. Over the next three years, Marian taught at a rural country school located outside Anthon, Iowa.

On June 3, 1948, Marian was united in marriage to Albert Sevening in the St. Joseph Catholic of Church of Anthon. The couple made their home and farmed north of Anthon where they welcomed their three daughters: Polly, Sue, and Faye.

Marian volunteered as a 4-H leader for the Active Anthonettes 4-H Club for several years. When the Anthon Pubic School burnt down and the school was in need of help, Marian went back to work as a teacher’s aid before starting her 17-year long career at the Anthon Coast to Coast store. Additionaly she housed many student Physician Assistants for the Anthon clinic.

For over 25 years, Marian enjoyed baking and decorating cakes. She loved to paint with oil paints, and make her famous cinnamon rolls and homemade noodles. Marian also looked forward to having family and friends over for Sunday dinner.