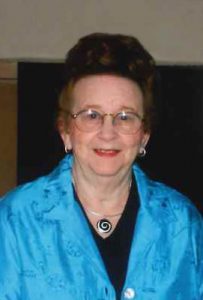 A Funeral Service will be held at 11:00 a.m., with a Visitation held one hour prior from 10:00 a.m. to 11:00 a.m., on Wednesday, January 5, 2022, at the United Methodist Church of Anthon, Iowa. Committal Service will take place in the Memorial Park Cemetery of Sioux City, Iowa.  Armstrong – Van Houten Funeral Home of Anthon, Iowa, is in charge of the funeral arrangements. Condolences may be sent online to www.armstrongfuneral.com.

Ernestine Edna “Tiny” Steinhoff, the daughter of Ernest and Edna (Phillips) Weathers, was born on Epiphany Sunday, January 6, 1923, in rural Oto, Iowa. She grew up in Oto and graduated Valedictorian of the class of 1941 from Oto High School.

On February 10, 1942, Ernestine was united in marriage to Clifford Charles Steinhoff in the rural German City Church of Holly Springs. The couple made their home in Oto and relocated to a farm west of Anthon, Iowa, in 1951. There, Ernestine and Clifford raised their children Ronald and Vicki.

Ernestine had a rich involved life, making her almost 99 years something to celebrate. She enjoyed reading, doing puzzles, traveling, playing cards and embroidery. Ernestine was a faithful member of the United Methodist Church of Anthon, where she participated in United Methodist Women, sung in the choir and was a charter member of the church young mothers the “Twig Benders”. She also served as an election official for many years and volunteered in the culinary booth at the local Woodbury County Fair annually.