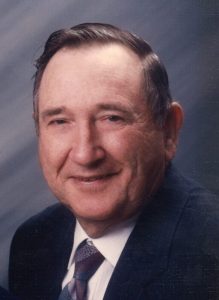 Vincent R. Susie, age 94, of Cushing, passed away on Thursday, December 30, 2021 at the AbiliT Holstein Senior Living Center of Holstein.

A funeral service was held on Tuesday, January 4, 2022 at 2:00 PM at the Nicklas D. Jensen Funeral Home of Holstein with Pastor Bob Lewis officiating. Burial will be held at the Cushing Cemetery of Cushing.

In lieu of flowers, memorials can be directed to Cherokee Regional Hospice and the Cushing Fire Department. The Nicklas D. Jensen Funeral Home of Holstein is in charge of the arrangements. Online condolences can be made at nicklasdjensenfh.com

Vincent Ray Susie was born May 1, 1927 in Battle Creek, Iowa to Della (Andresen) and John Susie, Jr. He graduated from Cushing High School. After graduating he began his lifelong occupation of farmer and livestock producer.

He was united in marriage to Norma Schug on November 26, 1948. To this union four daughters were born, Sandra, Kathleen, Jean and Rosemary. They raised their family on a farm east of Cushing in Battle Township. After retirement they moved to Cushing but he continued to farm for several more years.

Vincent enjoyed fishing, his daily coffee hour with friends, watching Judge Judy, and trips to the casino in Sloan. You could find him tapping his foot each Saturday evening at 9:00 while watching the Molly B. Polka Hour. He enjoyed talking with people wherever he went, always laughing and telling jokes.

Vincent would always have a piece of chocolate next to his chair. He served on the Cushing City Council for 16 years and as the Township Assessor. Vincent was a member of St. John Lutheran Church of Cushing.

Vincent was preceded in death by his parents; his beloved wife, Norma; great-grandson, Marshall Williams and two brothers, Kenney and Elmer.