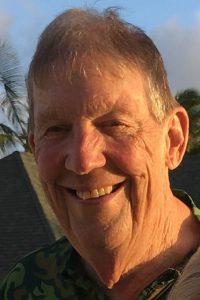 James Joseph Sheehan died on December 26, 2021, on the island of Kauai, Hawaii, where he had a second home.

A Mass of Christian Burial will be at Sacred Heart Catholic Church in Sioux City, Iowa, near his Dakota Dunes, South Dakota, home on January 28 at 10:30 a.m. with Father Terry Roder as Celebrant. The family will be present at the church beginning at 9:30 a.m. for visiting prior to the Mass. Burial will be later at Calvary Cemetery, LeMars, Iowa, with his son, Reverend John Sheehan, officiating.

Meyer Brothers Colonial Chapel is in charge of the arrangements. In lieu of flowers, memorials to the Sioux City Symphony or Gehlen High School would be appreciated. Online condolences may be offered to the family at www.meyerbroschapels.com

James, known to his friends as Jim, was born on September 24, 1936, to Joseph Fahey Sheehan and Maurine (Gard) Sheehan. He graduated from Gehlen High School in LeMars where, as center on the basketball team, he had a devastatingly accurate hook shot. Jim graduated from the University of Notre Dame in South Bend, Indiana.

He spent his junior year abroad, at the University of Vienna in Vienna, Austria.

He also attended Harvard Business School in Cambridge, Massachusetts, and the University of Wisconsin Graduate School of Banking in Madison, Wisconsin. He served in the U.S. Navy.

After graduation, Jim managed Sheehan Produce Company until 1967 and worked at the First National Bank, both in LeMars. He was President and Chairman of the Board of Farmers Savings Bank in Pierson, Iowa, from 1967 to 1997.

Jim was active in many banking and civic organizations during this period.

His family was most important to him. James married Rosemary McGuirk in 1961 and they traveled extensively during their 57 years of marriage. They valued education, community, good conversation, and their Catholic faith.

Jim is also survived by his brother Joseph (Patricia) Sheehan and sister Maureen Ann Sheehan, as well as many beloved nephews, nieces, cousins, and friends.

Jim was preceded in death by his wife, Rosemary, his parents, and a brother, Dennis (Maureen) Sheehan.