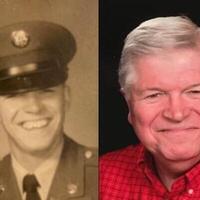 Services will be held 6:00 pm Wednesday, May 4, 2022 at the Waterbury Funeral Service of Sioux City, 4125 Orleans Ave. Visitation will be held from 4-6 with the family present from 5-7 pm at the funeral home with Military Honors provided by United States Army and the American Legion Post

Jim was born February 27, 1946, in Cushing, Iowa the son of Verlin W. Anderson and Dorothy (Barker) Anderson. He graduated from Correctionville High School in 1964.

Jim served in the US Army at Fort Benning, Georgia from 1965 – 1967 and was an active member of the American Legion Post 79 in Correctionville, Iowa. He married Sharon Gill on August 16, 1968, and in this union, three children were born. Sharon died on January 3, 2004.

On December 29, 2007, Jim married Marilyn Ortner. He worked in sales for various LTL Freight Companies. Jim served as President of the Transportation Club of Sioux City In 1984. Most recently he worked at Sioux City Ford delivering and transporting vehicles. Jim was very athletic and loved sports, especially basketball, fishing, bicycling, and golf, but most of all he loved being a grandfather.