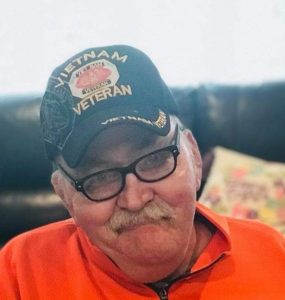 Kermit A. Johnson, 79, of Vancouver, Washington, formerly of Bronson, passed away on October 26, 2021 after a short battle with pneumonia and heart failure.

A private service will be held on May 20, 2022 at 11 a.m. with family present. Burial with military honors will be at Floyd Township Cemetery in Bronson. Kermit’s son, Glendon M. Johnson will be buried next tohis father at that time.

Kermit, along with his twin brother Kenneth, was born in Sioux City on February 26, 1942 to Marie and Glendon Johnson.

Kermit grew up in Bronson and attended Bronson Consolidated High School. His fond memories were helping bail hay for the local farmers and working in his dad’s garage.

Kermit enlisted in the Army in June of 1962 and was trained as an Armor Track Vehicle Mechanic. He also went through Airborne Training. He served in the Vietnam war in 1963, and in Germany. He was discharged in February of 1973 after 11 years of honorable service. He worked numerous jobs before his stroke in 2005.

He is survived by his daughters, Charlotte Madden of San Antonio, and Pamela Johnson of Sioux City; his twin brother, Kenneth Johnson of Bronson; his sister, Glenda Truesdell of Sioux City; and his brother Raymond Smith of Dixon, Missouri.

He was preceded in death by his parents; his step-dad, Gene Smith; his brother, Edward; infant daughter Teresa Ann; and son, Glendon Johnson.