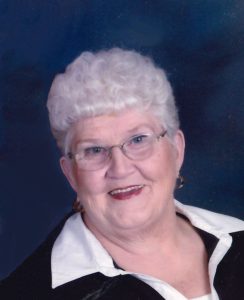 Patricia “Patty” Mogensen, 86, of Sioux City, IA passed away on Thursday, April 28, 2022. She was lovingly surrounded by her kids.

Patricia Ann, the daughter of Leo and Mary (Walker) Reeves, was born April 17, 1936 in Sioux City. She grew up in Sioux City and graduated from East High School in 1954.

Patty was united in marriage to Raymond “Ray” Mogensen on April 6, 1961 in South Sioux City, Nebraska and this union was blessed with four children. The couple moved to California in 1964 and also lived in Oregon for a short period before returning to Sioux City in 1968. They moved to Pierson in 1972.

Patty worked jobs in the community and also ran her own barbershop. In the early 1980’s Patty and Ray owned and operated the Rusty Spur Saloon for several years. The couple moved back to Sioux City in 1988.

After returning to Sioux City, Patty worked various jobs including The Hilton, Bush Cleaners, and Tri-State Nursing until her retirement.

Ray passed away on February 13, 2010 and she continued to make her home in Sioux City.

In earlier years, Patty was a member of Eastern Star, Towne & Country and the American Legion Auxiliary. Later she became active in her church at Wesley United Methodist.

Patty loved to cook and would always offer a bite to eat. She enjoyed socializing, going places, and meeting friends for coffee or supper. She liked scrolling through Facebook and keeping up with political events. Most important to Patty was her family and close friends, whom she loved dearly.

She is survived by her children: Richard “Rick” Mogensen and wife Connie Jensen of Correctionville, IA; Tony Mogensen and significant other Brandi Barnes of Sioux City, IA, and Donna Lee and husband Bob of Cherokee, IA; a daughter in-law, Melanie Mogensen of Dow City, IA; eleven grandchildren; thirteen great grandchildren; one sister, Donna Ward of Bemidji, MN; many nieces, nephews, other relatives and friends, and her special fur baby “Sophie” the cat.

She was preceded in death by her parents, Leo Reeves and Mary Reynolds; her husband, Ray; her son, Joseph “Joe”; twin infant daughters; two grandbabies; and her brother-in-law, Gary Ward.