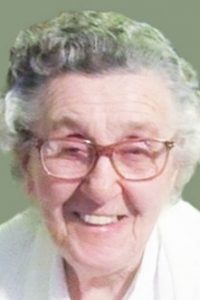 Anna (Annie) was born on June 20th, 1925, to Joseph and Anna Necas in Eagle’s Nest, New Mexico, located in the Moreno Valley. She grew up with her three sisters and one brother on 60 acres of land in a two-room log house which was built by her father with logs carried from the Rocky Mountains.

On November 2, 1945, Anna married Robert Fred Packard, who had just been discharged from the Air Force after WWII. After living in New Mexico for their first year of marriage, they moved to various places in Iowa, before settling in Lawton, IA to raise their 3 children.

Throughout her life, Anna held a variety of positions, including stay at home mom and lead cook at the Char-Mac Nursing home in Lawton, IA. Anna was truly a jack of all trades, as her skills included gardening, baking, cooking, quilting, sewing, crocheting, and doll making to name a few. The legacy of her skills will be remembered through the handmade gifts created and given to numerous family and friends.

In addition to her parents and husband, Robert, Anna was preceded in death by her siblings, Emily, Rose, Mary, and Joseph, and grandchild, Daniel Packard.