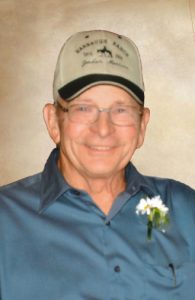 Joseph “Joe” William Harbaugh was born on March 18, 1934, in Miles City, MT, to Bill and Margaret Harbaugh. After graduating from Custer County High School in 1952, Joe went to work for Shell Oil Co. on the Seismic Crew in the Glendive, Montana area. Later the entire crew moved to the Workland, Wyoming area.

In April of 1953 he joined the U.S. Navy and went to boot camp in San Diego, California. Joe then attended Aviation Prep School in Norman, Oklahoma, followed by Aviation Electronics School in Memphis, Tennessee. Upon graduation he was sent to North Island, California, where he joined the squadron that flew the AJ-2, a plane that was on the drawing board to drop the A-Bomb.

While in the service Joe met the sister of one of his shipmates, Miss Diane Brown. After their courtship, the couple married on December 7, 1956. Upon his honorable discharge they moved back to Miles City, Montana and he joined the Brotherhood of Carpenters as an apprentice. In 1963 they moved to Anthon, Iowa, with their two oldest children.

They raised their four children all in Anthon. Joe got into the Turn Key Log Home building business and steel roofing business where he worked for many years.

Upon retirement, Joe and Diane drove their RV to Arizona for several years during the winter months. They were instrumental in starting the Anthon Rescue Squad and the Little Sioux Cycle Club. Joe was very active in the American Legion. One of his proudest achievements was helping erect the silhouette of the Iwo Jima flag raising behind the veterans’ wall in Anthon.

The family would like to thank Hospice of Siouxland for the compassion and care they provided for Joe.