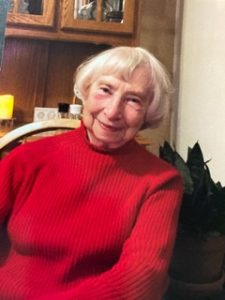 Katherine Elizabeth Henshaw, age 89, of Sioux City, passed away peacefully on Tuesday, May 10, 2022 in Sioux City.

A funeral service was held on Wednesday, May 18, 2022 at 2:00 PM at the First Lutheran Church of Sioux City with Pastor David Halaas officiating. Burial was at Arlington Cemetery of Moville.
The Nicklas D. Jensen Funeral Home is in charge of the arrangements.

Katherine Elizabeth Wendel, the daughter of Emil and Ida Wendel, was born November 7, 1932 on the family farm in Union County, South Dakota. She attended Williams #12, a country school in Union County, SD from grade one to three. Upon moving to Moville, Iowa in 1942, she attended Arlington #7, the country school kitty corner from the family farm. Katherine graduated from Moville High School in 1950.

While growing up on the farm, Katherine was an active 4-H member of the Ambitious Arlingtoneers Girls 4-H Club from age nine until age 21. At that time members could remain in 4-H until age 21.

Katherine was active in Trinity Lutheran Church, where she sang in the church choir, taught Sunday school and Vacation Bible School and was a substitute organist and Sunday school pianist. During high school days she was active in vocal music activities, plays, declamation contests and on the staff for the school paper and school annual. Katherine attended Nebraska State Teachers College (now Wayne State College), earning her two-year teaching degree in 1952. She began her teaching career at Lawton, Iowa.

Katherine met Alan Scott Henshaw from Alexandria, Missouri, while teaching at the college in Cedar Falls. Alan was a graduate of the University of Missouri and teaching at Stanwood, Iowa, when they met. They were married at Trinity Lutheran Church in Moville on December 26, 1965, moving to Sioux City in October 1966 where both held education positions in the Sioux City Community Schools.

Alan passed away on July 27, 1993 and is buried in Arlington Cemetery east of Moville.

Katherine joined the Sioux City Community School District central office administration group in the fall of 1967 as an elementary consultant for the district. Eventually Katherine was named the K-12 curriculum director for the district. She retired from this position on July 1, 1997.

Katherine received numerous awards during her tenure with the Sioux City Schools including the National Council of Teachers of English Program of Excellence Award in 1989, in which she was honored for creating and implementing the all-day kindergarten curriculum program in the Sioux City Schools. Also notable, she frequently participated as the Iowa representative for planning new editions of textbooks used in schools throughout the United States.

Katherine enjoyed a full, active life in which faith and family was most important. She enjoyed spending time with her family, most especially her many nieces and nephews, and now great and great-great-nieces and nephews. She could often be found gardening, shopping, traveling, decorating her home, reading magazines, writing birthday cards and letters and going to the Woodbury County Fair, and participating in one of the numerous church and community activities in Sioux City.