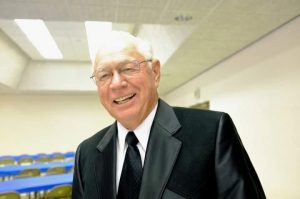 George was born January 28, 1929 in Sioux City, IA the son of of William D. & Hilda L. (Hinkhouse) Hardie. He attended a one-room school throughout his elementary years before attending Pierson High School and graduating in 1946.

Following graduation he attended Wayne State College before moving back to Pierson where he began farming one mile north of Pierson. George and Lainys Laude of Kingsley, IA were married March 25, 1951 prior to George entering the U.S. Army.

George served two years as a special agent with the army counter intelligence. Following his honorable discharge he and Lainys moved to Pierson where they farmed and raised their daughters, Leslie and Lisa.

After farming, George worked at Wells Blue Bunny in LeMars, Iowa until his retirement. He and Lainys enjoyed golfing, square dancing and playing cards.

Also, George enjoyed snow skiing and was very active in the First Christian Church of Pierson serving as a deacon and elder. George was also a member of the Masonic Lodge, where he served as a Master.

He was a 49-year member of Abu Bekr Shrine, participating in the Hospital Dads and the Clown unit. He was an active member of Eastern Star and of the American Legend and Elks.

George and Lainys were able to winter in Mission, Texas for three years until Laniys passed away unexpectedly December 7, 1999.

George continued to go to Texas during the winter months where he met Geraldine Witmer. George married Geri Witmer and sold the acreage and moved permanently to Mission, Texas.

He was happy about living right next to a golf course; one year he golfed 400 rounds. He and Geri loved to go dancing, and often would go 3-4 nights a week.

He is also survived by three great-grandchildren, Cameron Stewart and Sawyer and Emery Lanahan.

George was preceded in death by his parents, his first wife, Lainys Hardie and a brother, William Hardie Jr.

Memorials may be directed to the Kingsley-Pierson FFA.