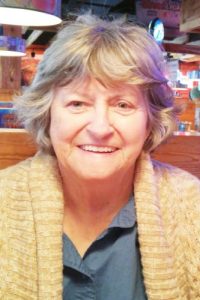 In the fall, family and friends will gather to honor her life with a memorial service.

Darlys was born Darlys Ann Stevens on July 7, 1937, in Kingsley, Iowa, to Clarence and Blanche (McNamara) Stevens. She moved with her family to Des Moines, Iowa, where she attended school. They then moved to Sioux City in 1953.

She married Clayton Woods on Dec. 17, 1955. They owned Clay’s Corner in Moville, Iowa, and Clay’s Corner in Kingsley, Iowa from 1977 to 1983. Darlys owned and operated two businesses in Sioux City: The Tradewinds Lounge at the Imperial Motel and The Inn Place at the Rodeway Inn in downtown Sioux City.

On June 2, 1984, she married Wayne Arey at the Little Brown Church in the Vale in Nashua, Iowa. They then moved to Denver, Colorado, where they lived for 12 years.

Dar and Wayne then moved to Grand Junction, Colorado, for another 12 years. They retired to Ft. Myers, Florida, in 2009.

She was preceded in death by her parents; an infant son, Robert Clayton; sisters Wanda Farrell and Dee Cumings; and daughter-in-law Brenda Woods.