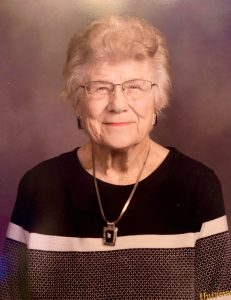 Frances LaBelle Foreman was born May 23, 1933 in Battle Creek, Nebraska to Walter Theodore and Elsie “Marie” (Nelson) Werner. She was raised on their family farm with her siblings LaRue and Walter “Eugene”. LaBelle was baptized at St. Matthew Lutheran Church in Meadow Grove, Nebraska.

She attended country school and public school in Meadow Grove until the 7th grade when their family purchased a farm south of Galva, Iowa and they relocated there. She was confirmed at St. John’s Lutheran Church in Galva. LaBelle went to school in Galva until the 10th grade when the family moved to Schaller and she graduated from Schaller High School in 1950. While in high school she enjoyed singing in the large and small groups and was a cheerleader for the football and basketball team. After graduation she attended Buena Vista College.

LaBelle married Richard Foreman on November 18, 1951 at the St. Paul Lutheran Church in Schaller. They were blessed with four children, Rick, Sandra, Anne and Steven. LaBelle enjoyed being a mom, Sunday School teacher and was active in the Ladies Guild at St. Paul in Schaller.

In 1971 she was employed by the U.S. Postal Service working in many offices including Galva, Schaller, Early, Battle Creek and Storm Lake before retiring as Postmaster at Washta.

LaBelle had a deep faith and was an active member of St. John’s Lutheran Church of Galva, attending regular Bible studies and helping wherever she could. There LaBelle taught Catechism class and was a summer Bible school leader.

She was an avid gardener raising beautiful flowers and delicious vegetables, loved working outside, never quit until the sun went down. She was right beside helping Richard, with their farming by driving truck, combine, walking beans and riding on the bean bar and much more. She so enjoyed taking care of their livestock, which were sows and their baby pigs.

LaBelle was a member of the W.W.W.C.C. (Wild Widowed Women Card and Coffee Hour), in Schaller. Many of her favorite memories were celebrating birthdays where all family and cousins gathered and even the neighbors joined in! Best of all was the birthday cake served with homemade ice cream!! To top it all off, Grandma Belle dearly loved her family and looked so forward to family gatherings.