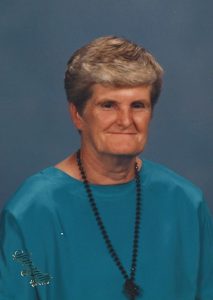 A funeral service was held on Tuesday, July 12, 2022 at 10:30 AM at the St. John Lutheran Church of Climbing Hill with Pastor David Schoop officiating. Burial will be at the Westfork Township Cemetery of Climbing Hill. The Nicklas D. Jensen Funeral Home is in charge of the arrangements. Online condolences can be made at nicklasdjensenfh.com

Joan Ardette (Tennis) Martens was born July 6, 1930 near Luton, Iowa. She was the daughter of Arthur H. and Ruby A. (Johndreau) Tennis.

Joan was baptized and confirmed in the fall of 1940 at the Climbing Hill Baptist Church. On May 1, 1949, she was confirmed at St. John’s Lutheran Church in Climbing Hill.

She graduated from Climbing Hill High School in 1948. Following graduation she worked as a switchboard operator for S.C. Telephone, assembly line at Wincharger, and her favorite job was a cook at Woodbury Central-Climbing Hill school.

Joan was married to Henry K. Martens Jr. on January 26, 1949 at St. John’s Lutheran Church in Climbing Hill, Rev. Elmer Wehrspann officiating. They settled on a farm in the Anthon and Climbing Hill community. Blessed to this union were Perry K., Becky J. and Kalvin A. Martens.

Joan volunteered as a church leader, a 4-H leader and as a librarian at the McAllen Texas library. She loved golfing, sewing, cooking and baking. Her favorite beverages were Pabst Blue Ribbon beer and Long Island Iced Tea. Joan and Henry spent winters at Paradise Park in McAllen, Texas and she continued to spend time at the park with her friends after Henry passed in 1991.

Survivors include sons Perry and wife Patricia of Hornick, IA and Kalvin and wife Jana of Moville, IA; and a daughter, Becky and Mike Nothem of Remsen, IA. Joan was also blessed with 12 grandchildren and 39 great-grandchildren.

She was preceded in death by her husband, Henry; parents, Arthur and Ruby; and a sister, Janet Pick.