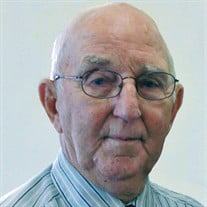 Vernon Grant Heck, 96 of Climbing Hill, Iowa died on Thursday, June 30, 2022. Living life to the fullest until the very end, he was granted his final wish of completing his life independently on the farm he helped build.

The family soon moved to a farm in Onawa, Iowa and then again in the late 1930’s to Moorhead, Iowa where Vernon farmed with his dad until 1949.

Vernon then moved to Sioux City, Iowa and worked in a variety of jobs before joining the U.S. Army from Sept 1950 until September 1952 during the Korean Conflict, obtaining the rank of Sergeant.

After returning home, Vernon met the love of his life, Viola Saar Daily, marrying her on December 2, 1953. Vernon, Viola, and son Ray moved to what would become the family farm outside of Climbing Hill, Iowa in 1954. Here the couple raised four boys: Ray, Jerry, Marty, and Doug.

Vernon farmed until his retirement in 1988, continuing to live on the homestead for a total of 68 years before his passing.

He was a member of the First Baptist Church of Climbing Hill, Leslie F. Seaton American Legion Post 666 of Smithland, and 52-year member of Friends of Bob.

He loved going fishing in Canada with his family, gardening, travelling, restoring old John Deere tractors and being a part of the Tri-State Antique Tractor Association.

He was preceded in death by his parents, wife Viola, sister Vera, and brother Eugene Heck.

In lieu of flowers, the family suggests memorials to Shriners Children’s Hospital.